Carols for Everyone 2020
with
​Southwell Renaissance Singers

For nearly two decades, Southwell and District Lions have presented an annual feast of Christmas Music in Southwell Minster. Known as Carols for Everyone, the concert was performed in conjunction with Southwell Orchestral Society and Southwell Choral Society, with the kind permission of the Dean and Chapter of Southwell Minster.

The event has also featured performances from local schools and musical groups, along with plenty of enthusiastic audience participation in the singing of well-loved Christmas Carols. Each year, the proceeds from the sale of 600-700 tickets and a retiring collection have raised thousands of pounds for a nominated charity, which alternated annually between local and international.

Regrettably, due to the restrictions imposed to combat Covid-19, we are unable to hold this unique and traditional event this year.

However, we would not like you to go entirely without a truly memorable festive season appetiser. In place of our annual concert, we are able to bring you a wonderful performance of traditional Christmas Carols by the Southwell Renaissance Singers, a local choral group of international renown, which you can listen to in the comfort of your own home and as often as you like.

In return, we only ask that you consider using the justgiving facility below to make a donation, which will go equally to our chosen charities – Reach and Southwell Live at Home (now MHA Communities – East Midlands). Both charities do amazing work for our community and, like many others, have seen their ability to raise funds to support their members badly hit during the pandemic so your generosity will be more important - and more welcome - than ever this year.

You can simply listen to the performance directly or you can download it by clicking on the links below.

Southwell and District Lions thank you for your support and hope that you and your family have a truly Happy Christmas and wish you all the best for the New Year.

We will be back in the Minster in 2021 and look forward to welcoming you to Carols for Everyone then!
1. You can listen to the full CD of 20 Carols by playing the audio file immediately below
2. You can download the full CD and a list of the carols by clicking on the download file icons below  ​
​© COPYRIGHT NOTICE
Southwell renaissance singers own the copyright to this “a Capella” compilation of 20 carols. You are able to download a single copy of this compilation for your own personal use within your home. You are not entitled to:

3. Use it in a public performance

5. Put your name on copies of the music

7. broadcast it
(Hospitals and schools may however download and broadcast the music over their internal radio or speaker systems for the benefit of patients and school children.)
If you would like to make a donation to support

Reach and/or Live at Home

regular Carols for Everyone event in the Minster​ then

​click on the JustGiving link below from 1st December

Southwell Renaissance Singers were a group of friends in Southwell Choral Society who decided (many years ago) to form their own group during the Summer Holidays. Under their director, David McIntosh, they quickly established themselves and over the intervening years regularly performed in fundraising concerts both here and abroad.

The various members stayed together over the years and occasionally created something special, like this group of carols recorded by Dr Alec Wells over several evenings in the Chapter House of Southwell Minster.

In this difficult year, particularly with the cancellation of so many events, they are pleased to make this recording available to the Lions to help them raise much needed funds for this year's nominated charities. 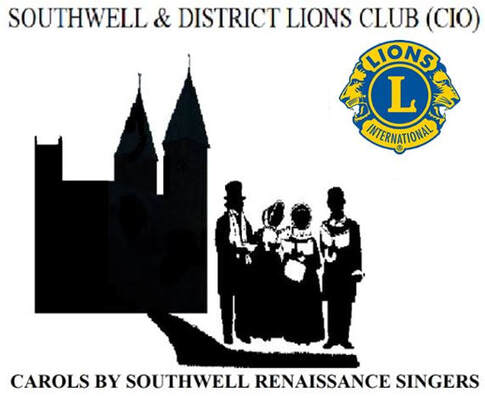